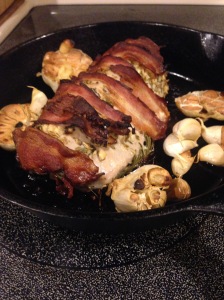 Holy wow, this was good. No, this was great. Ignoring the fact that there is bacon present (hard, I know) the overall flavors on this dish were tremendous. And, it is super easy to make. I don’t often repeat was is said within the recipe/blog post (you guys/gals are smart and can read for yourself) but I feel the need to call out that it is super simple. I had never heard of this “Porchetta” before but apparently to do it the traditional way requires several days of drying/aging and whatnot. This recipe takes all of that away and still delivers a fantastic dish. I don’t think my picture does it justice. Read the recipe here.

I made no changes to the recipe. I was able to get it started and let it marinate in the fridge all day before cooking it. It says to use a “baking dish” and I chose one of our cast iron skillets. I used a regular cut bacon (not thick cut) and used enough to cover the pork. It shrunk a bit more than I would have liked but cooked well in the time frame.

Maybe one change – the cooking time/temp. It said to cook it for 40-45 minutes or until “medium” (145 degrees). While I know the rules have changed for the temps around eating pork safely, I still wanted to get it to 165 degrees. Regardless of the fact they wanted you to let it sit for 10 minutes (which probably has more to do with the juices and letting it rest than cooking it longer). I check per the temp after 40 minutes and it was actually pretty close to 165. I let it go for 5 more minutes and it got there. I did let it rest for a bit before slicing. And you know what?  It was still nice and juicy and tender. Perfect.

Quick circle back to the ease of the dish. All you need to do is put the marinade together, let it sit and then put it in the pan with the rest of the stuff and cook it. Done. Easy. Simple. Definitely on my “make again” list.